Despite being tested by a series of incidents, we survived a very wet summer camp at Adamswell Scout Camp near Langton Green in August.

On Monday we pitched camp between rainstorms and had dinner cooked and on the table when the by now continuous rain caused the River Gromm running through the site to rise, and rise, and rise, until…

The scouts scrambled to save their kit, and one patrol managed to hastily move their tent before the waters reached them. However the patrol tent pictured was inundated.
The Adamswell warden, Gordon, very kindly leant us a patrol tent from stores and they were all settled in in time for bed. 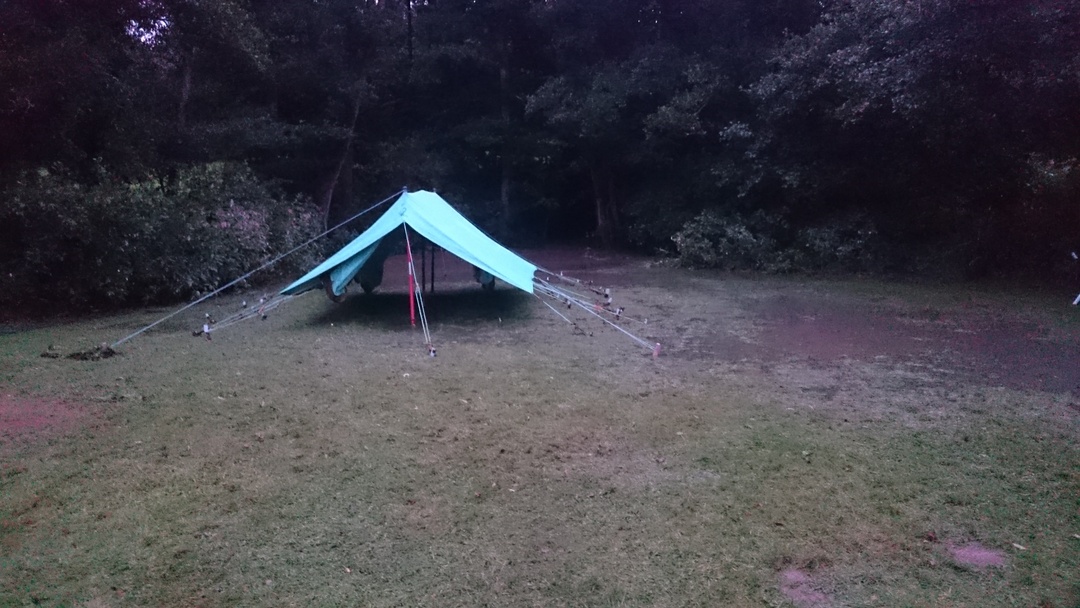 The next day we woke up to the sun bright and the flood gone. Unfortunately the fine weather was somewhat intermittent resulting in a the bridge building being postponed until later in the week.

On Wednesday we did some local geocaching before heading off to Lower Grange Farm for a climbing session. The climbing was so good we completely failed to take any photos at all. On the way to the supermarket to buy provisions for the patrol cooking competition, we managed to run out of fuel in the minibus. Fortunately there was a petrol station just around the corner.

Thursday saw blue skies and we were joined by some of our Cubs and Beavers. Activities on site in Adamswell were using the mobile caving system, archery, abseiling finishing off the day with a really closely fought cooking competition.

After we struck camp we finally managed to build our pioneering project, a bridge across the stream. The bridge was great! However, it was optimised for scout-sized people and Michael proved to be a couple of kilos too heavy for it!